Valentine’s Day is around the corner. My mother was a stay-at-home mom and ex-school teacher. Therefore, our home was decorated like she was changing out bulletin boards in a classroom for each season. During February,  the house was awash in red hearts. Combine that with chocolate, jokey greeting cards, and love and you have a semi-silly holiday that’s right up my alley.

So naturally, I was at the big red & white bull’s eye store this weekend purchasing a Valentine’s Day card for my wife. In the midst of realizing that it was easier to find cards that were gender neutral, lo and behold, there was 1 card specifically designed for 2 women. Some progress. 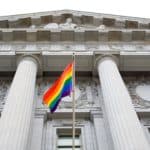 As I loaded up my cart with new towels (who knew I needed towels?), I reflected on the fact that it was less than 4 years ago that marriage became legal for same-sex couples across the U.S. To be specific, Friday, June 26, 2015, the Supreme Court of the United States ruled in favor of marriage equality in a 5–4 decision. One vote – it passed by just one vote. President Barack Obama tweeted:

Today is a big step in our march toward equality. Gay and lesbian couples now have the right to marry, just like anyone else. #LoveWins

This changed the way society includes non-heterosexual couples in the marriage narrative. I’ve certainly seen it ease the way families accept same-sex relationships. Sadly, I still witness clients and friends deal with discrimination from family who lag behind due to religious reasons and a sense of shame or embarrassment over having a family member who’s gay. Additionally, segments of society would like the right to discriminate legally. 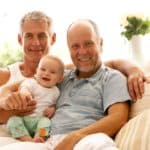 Painful to be sure. However, more often I’ve observed the legality of marriage have a galvanizing impact. Legal protection and societal validation can lead to an openness about relationship status where previously a person may have been evasive or closeted. Progress for sure. Less shame and fear is always good for mental health!

So on this week of Valentine’s Day, I’m turning to my LGBTQ+ community to share the love and how the right to marry has impacted lives.

How has Love Won?

“Being married has finally given my relationship real validation with my parents. We are no longer seen as ‘just girlfriends.’ In general, it gives me a warm & fuzzy feeling to be married to my best friend.”

“I guess for me being able to be married makes it more real. Nothing in our lives changed after the wedding, but now I can say to people that we are married. We are not two people playing house that can just walk away at any point. We are the same as anyone else, we are no longer different.”

“The movie Walk the Line prompted it. It was Johnny Cash’s marriage proposal to June during a concert that did it. We saw it at Christmas time and decided to get married. In our lives together we were already married as far as we were concerned, so the marriage was about our relationship being respected.”

“Let me tell you, we are going to be happy even if it kills us. We have gotten really good at talking things out. Even when the conclusion is not perfect, it’s ok, we tried. I know I’m not going to find someone better for me.”

“Getting married was about the comfort of knowing that the other one is taken care of and protected from a medical, financial, and retirement standpoint. Things like insurance and tax filing were part of the picture.”

“An unexpected outcome was that it made me feel more comfortable correcting people about my relationship. For example, she is my spouse not a friend or sister. It minimized fear and caused me to demand respect.”

“I didn’t need marriage to validate my relationship, I needed it to legally secure it. Being married wrapped safety around my relationship. I think many heterosexual people take it for granted, feel entitled to the security that the legal contract of marriage gives them.” 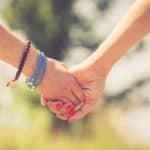 For me, 4½ years ago I shocked myself by loving the whole bride thing. I was so moved when we said our vows. It was surprising. After all, we had already been together for 18 years when we got married in California. I felt committed in my heart. Why would a piece of paper matter? But, it did.

So #LoveWins? Hell yes. Along with an overdue sense of safety, respect, and justice for people of the LGBTQ+ community. 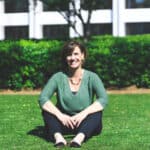 Kate Murphy, a therapist in Chamblee, GA,  specializes in helping you decrease stress and anxiety. You can live a more balanced, connected, and meaningful life. Kate works with individuals and couples over the age of 18 to support healing, communicating, and experiencing joy more often.

Sorry, the comment form is closed at this time.